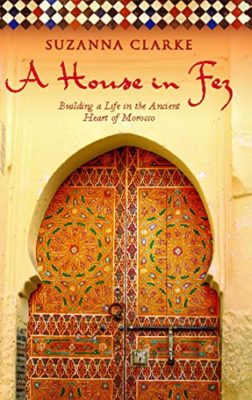 The House in Fes

Building a Life in the Ancient Heart of Morocco

Fez, is an amazing and fascinating city. It’s known as the best preserved, medieval city in the world. Walking through the gates of Fez is like walking back in time. At first, it doesn’t seem real until you realize that people are going about their lives all around you, albeit much like they did hundreds of years ago. Inside the city walls, there are mazes of donkey-trodden alleyways and narrow winding streets. Houses, many in need of preservation, are scattered among shops, souks, mosques, and communal bread ovens. Sewage systems are 1,000 years old and the crumbling mosaic work represent the handiwork of the past.

The author, New Zealander Suzanna Clarke, and her husband were vacationing in Morocco when they fell in love with the city of Fez. It wasn’t long until they bought a centuries-old home and began restoring it to its original magnificence. This was the beginning of their adventure.

The House in Fez recounts the restoration of the house as well as the bewildering and oftentimes hilarious journey of coming to terms with the fact that the Moroccan government policies and work standards are far different from western society. They come to recognize that to restore such a house in Fez, requires craftsmen who have developed their skills passed down to them from the generations that came before them. The work is done by hand, without the modern conveniences of machinery and mass production. Along the way, Clarke and her husband journey further and further into Moroccan customs and lore.

The book not only chronicles the oftentimes bewildering experience of navigating through archaic rules, vastly different concepts of time, and the crossroads between superstition and religion. It is also a story of two westerners submerging themselves into an unfamiliar culture that is more intricate than the layers of an onion. Upon completion of the project, the couple find that they’ve discovered a true sense of community in a land far from home. It’s a memoir of the generosity and openness of the Moroccan culture as much as an account of the trials and tribulations of renovating a home in a medieval city, which in many ways remains… quite medieval.

Beware of falling in love while on vacation. You might end up buying a riad. Less of a tourist center than Marrakesh or Tangier, Fez is the largest car-free urban area and the best-preserved medieval walled city in the world. While on vacation, Australian photojournalist Clarke and her husband were bewitched by the exotic city, deciding to return and begin a search for a riad (a large home with an inner courtyard) to renovate. This enjoyable narrative chronicles the couple's navigation through a puzzling new world. Readers get to tag along while Clarke deals with Kafkaesque bureaucracy, maneuvers delicately through relationships with neighbors, contractors and construction workers, and goes back to school to improve her French. She weaves this personal narrative together with snippets of the fascinating history and culture of her adopted country. This is an all too brief but enjoyable excursion into one woman's experience with a place she clearly loves. Readers will surely fall under its spell as well.
Copyright © Reed Business Information, a division of Reed Elsevier Inc. All rights reserved. Publishers Weekly

Suzanna Clarke is a photojournalist and the arts editor of The Courier-Mail (Australia), who splits her time among Australia, Bordeaux, and Fez. Visit her blog, The View From Fez at riadzany.blogspot.com. (from Amazon.com)