Moroccans pay tribute to the murdered Scandinavian tourists at a vigil in front the Norwegian embassy in Rabat on December 22. Picture: Fadel Senna/AFPSource:AFP

In the aftermath of a horrendous crime against two young Scandinavian women traveling alone, I’ve been asked by many of our followers about what they can expect in terms of safety in Morocco. I’ve pulled together a body of facts that help to answer that question.

In a country where violent crime is extremely rare, citizens are reeling in shock, and foreigners are forced to ask questions such as: “Am I safe in Morocco?” “Should I reconsider my travel plans?” “Is it too risky to go there?”

I’ve gathered the following data to the best of my ability. While I haven’t performed deep dives into the methodologies employed by the sources I’ve cited, I can safely say I’ve taken precautions to use credible sources with strong reputations for good data.

As a recap for those miraculously able to avoid the latest international news, Scandinavian students, Louisa Vesterager Jespersen and Maren Ueland were found brutally murdered at their camp site in the south of Morocco on December 17, 2018. At first, it was believed the act may have been coordinated with ISIS, however; those suspicions were ruled out by investigators. The three men apprehended and charged with the crime have been labeled “lone wolves” by authorities. Although unassociated with international terrorist organizations, it is believed the men attempted to hastily form a terrorist group. Several others have been arrested in connection to the crime. One individual arrested is a man of Swiss-Spanish origin who was involved in a leadership role. Morocco takes a zero-tolerance approach toward terrorism, and the authorities have acted swiftly and comprehensively.

My coverage of the crime is intentionally brief as investigations are continuing, and the review of specific events is outside the scope of this article. Although crimes such as this are heart-wrenching and unnerving, my purpose is to look at the perceptions vs. reality related to safety in Morocco.

What do the numbers say? What are the facts? Where is the line between perception and reality? Is it realistic that a single crime can change the nature of an entire country?

I’ll explore factors that seem to form the most common perceptions of travel within the undeveloped world, specifically Morocco: Risk of Terrorist Attacks, Prevalence of Homicide, General Unrest, and Availability of Firearms. For each factor, I  will look at perceptions vs. reality. Finally, I’ll present general suggestions to consider before  jumping on a plane to Morocco, or any destination for that matter. 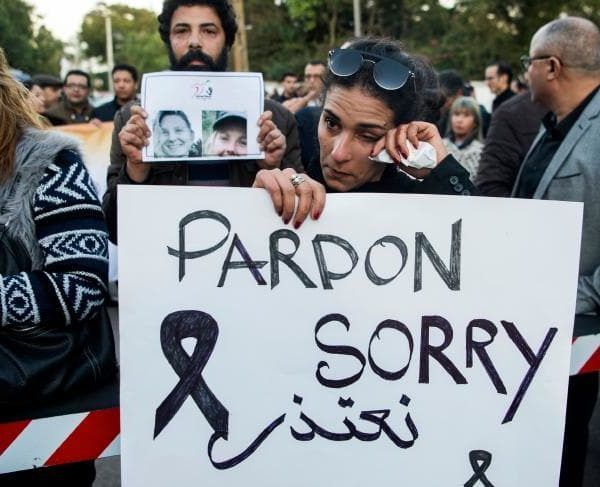 Perception: Morocco is at high risk for terrorist attacks.

Reality: Morocco has a lower incidence of terrorist attacks than the USA.

The Global Terrorism Database (GTD), an open-source database tracking terrorist attacks around the world, defines a terrorist attack as, “the threatened or actual use of illegal force and violence by a non-state actor to attain political, economic, religious, or social goal through fear, coercion, or intimidation.”

Although it is factually correct that the United States has, in recent years, experienced more terrorist attacks than Morocco, the number of attacks in both countries is well under world-wide norms. The point is that many westerners tend to apply blanket perceptions to the undeveloped world that just aren’t supported by real data.

The GTD data below show the number of terrorist attacks during a 47-year period in the world and in Morocco compared to those of the three countries from where the majority of our clients come: United States, Canada, and Australia. While Morocco may be perceived by some to experience a higher incidence of terrorist attacks, the reality is that the numbers don’t support that perception. 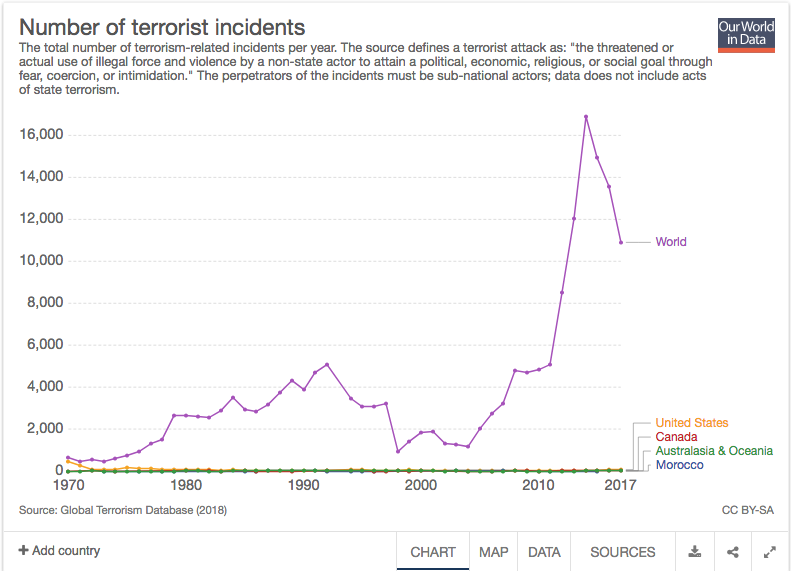 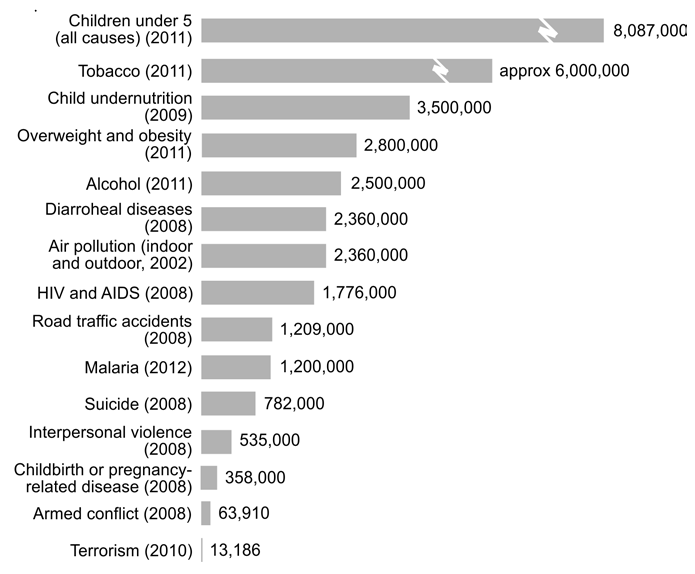 Perception: Murder is more prevalent in Morocco than at home.

Reality: The United States ranks above Morocco in per capita homicides over a ten-year period.

Data from the World Bank and World Development Indicators (below) don’t support the perception that homicide is more prevalent in Morocco. As shown, the United States ranks above Morocco in the per capita number of homicides over a ten-year period. Obviously, the United States’ rank of 8th percentile is also extremely low, but it doesn’t take a statistics master-mind to see that these data show an extremely low likelihood that you’ll be murdered in Morocco. 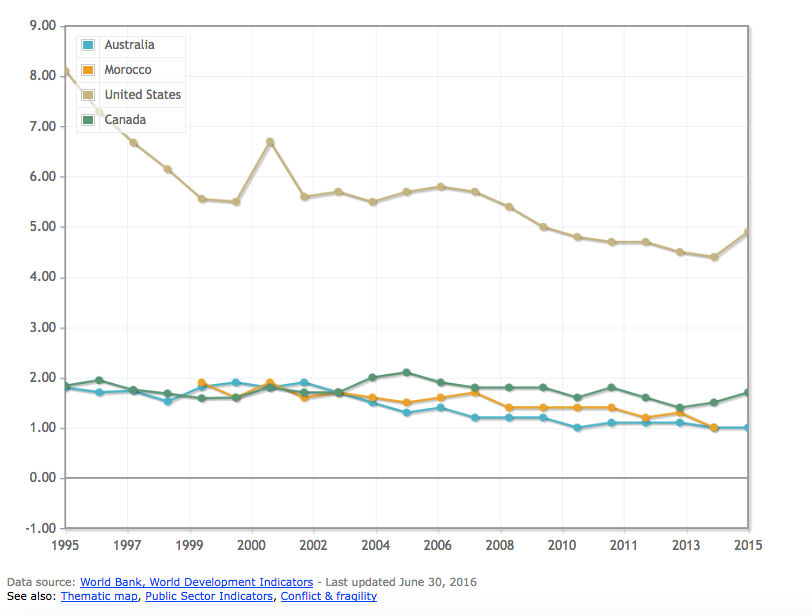 While it is factually true that Morocco is located on the same continent with other countries that aren’t exactly poster children for peace; Morocco itself is considered a peaceful and stable country. Morocco’s monarchy, King Mohammed VI, is a well-respected leader in the region who takes a comprehensive stand against terrorism. The country’s counter-terrorism strategy involves policies such as: Preventing Revolution, Combating New Terrorist Threats, Increasing Religious Reforms, and Regional and International Counter Terrorism Cooperation. According to a study by the Faculty of Humanities at Utrecht University,

“Morocco can be regarded as a stable country in the unstable MENA region which makes it a peculiarity.”

The same study points out that in 2015, Morocco took further steps to strengthen security throughout the country by launching the Central Bureau of Judicial Investigation (BDIJ). The BDIJ is the leading law enforcement agency tasked with counter terrorism and is similar to the FBI in the US. The agency works closely with regional and international partners to combat extremism and terrorism (Neefjes, 2017.)

In terms of peace, the 2018 Global Peace Index ranks Morocco as more peaceful than the United States and slightly less peaceful than Australia and Canada. Further details can be found  HERE.

Reality: The right to bear arms is not guaranteed by the Moroccan constitution.

Ironically every single Moroccan I know believes that guns are a major concern in the United States. I don’t disagree with them on that. In Morocco, aside from hunting rifles, guns are illegal. Hunting rifles require a detailed process of endless paperwork and permits, and the laws are strict in terms of who qualifies to use them. Moreover, firearms are simply not part of the culture in Morocco. ProCon.org, an organization that publishes research on controversial issues, reports that Morocco has had zero homicides by guns during the years studied (below).

I’ve split my time between Morocco and the US over the past six years, and I have heard no shortage of advice regarding my safety in Morocco. Further, I’ve been asked by many clients with well-meaning (but ill-informed) family members who offer dire warnings to stay away from Morocco lest they “never return.” The best response I have is that if something sounds like an extreme response, it probably is. My personal tendency is to avoid such responses and to look for the truth that’s generally found somewhere along the normal curve.  My recommendation is to look at the facts for yourself to make an informed decision. Remember that although Great Aunt Gertrude’s warnings may be bothersome, she is truly worried about your safety. She’s just not a globe-trotter, and she believes everything she hears from near fiction media. It’s unlikely you’ll change her beliefs and perceptions, so I recommend not trying. Instead, put your energy towards being an informed, level-headed global traveler. If you feel overwhelmed by Great Aunt Gertrude’s rantings, consider recalibrating by asking yourself logical questions such as the following:

Reality:    There’s more risk of falling in love with Morocco than becoming a victim of a violent crime within the country.

Come and experience this wonderful country yourself!