It’s official.  The Open Doors Morocco – Bedouin Bivouac is open for business and we couldn’t have asked for a more authentic desert launch.  Who better to share the inaugural night with than our friends at The Giving Lens?  The bivouac exists for the purpose of providing fair wages to locals and authentic cultural experiences for foreigners.  Read more about the unique background of our bivouac HERE.

How Best to Make Memories?

As a team, we wanted to make the first night of guests memorable.  We tossed ideas back and forth for a couple weeks, but nothing felt right. We thought about decorating the camels, but decided that tie-dyed camels would be the opposite of authentic. Besides that, their camel friends would never let them live it down. Then came the idea of a ribbon cutting ceremony, but we’re not very ceremonious people, and who wants to go to a ribbon cutting ceremony in the Sahara? And exactly what would we tie the ribbons to anyway? The idea of having a cake quickly came and went since that’s what we do in the US, and besides, ‘Toto, we’re not in Kansas anymore.’ Long story short, we decided to just let things unfold naturally. After all, that’s the Moroccan way. And that’s exactly what happened … 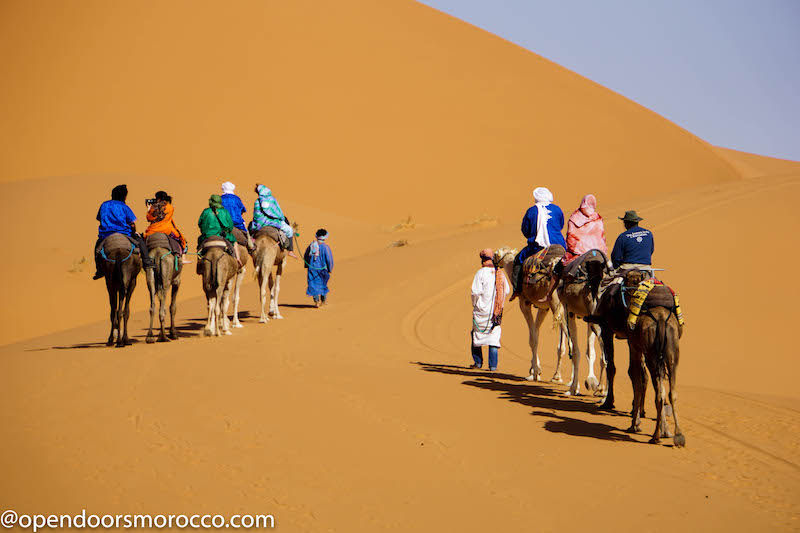 Shortly after arriving in the area, we dropped our guests at the meeting point for the camel ride to the bivouac, informally called “the camp.” Because the camp is situated in an isolated area amidst the massive Erg Chebbi Dunes, it’s impossible to drive a normal 4×4 to the site. The only vehicle that can make it out there is what I call a “dune crawler.” (I’m pretty sure there’s a more official name.) At any rate, camels are by far the most efficient means of transportation.

Tony Hoffman, one of our Giving Lens photography guests, generously decided to accompany Said and me to the camp in order to get shots of the group arriving. We wouldn’t have the documentation of this first night without Tony, pictured below.  Believe it or not, there is a New Yorker under all that desert garb. Interesting tidbit, Tony, the New Yorker, has recently discovered, through DNA testing, that he has North African Berber blood coursing through his veins. Tony will tell his story in a future article. 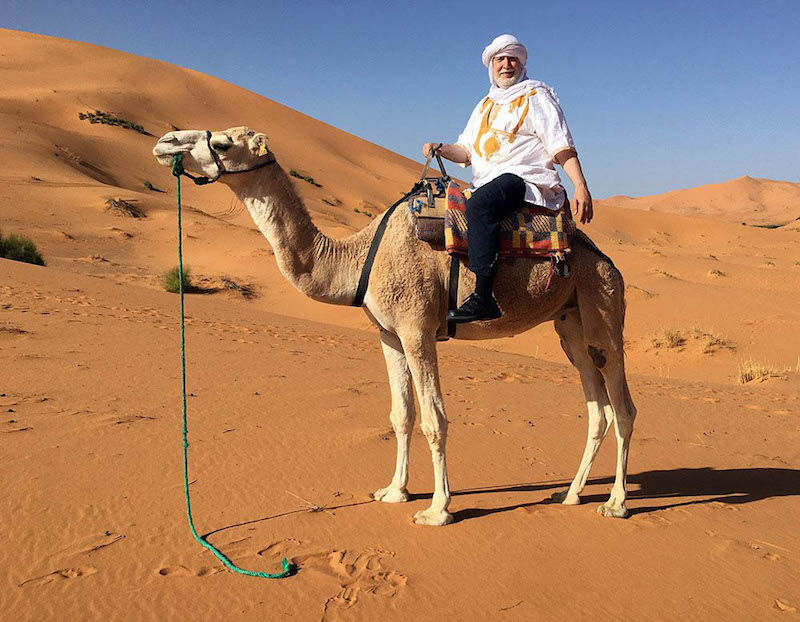 The Calm Before the Storm

This was my first opportunity to lay eyes on the camp since I had been in the United States when the “construction” began. Although I’d seen photos throughout the process, I wasn’t prepared for the real thing. It is stunning! The tents are authentic, camel hair, nomad tents.  The black color is set off by the salmon colored sand, unique only to the dunes in Merzouga. The colorful handmade carpets laid out, contrast nicely with the deep black of the tents. 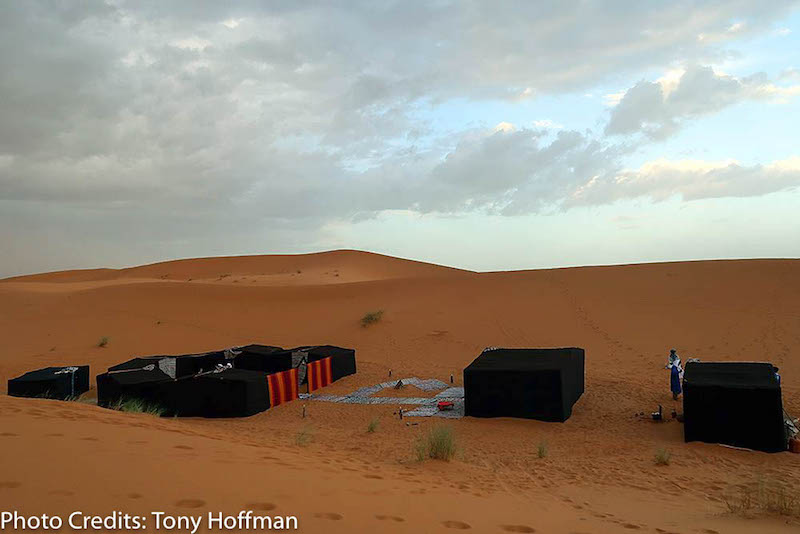 And best of all, is our “backyard.” The ridge just above the tents ascends straight to the top of the massive dunes. Guests can scale the steep mountain of sand to be rewarded by the miles of rolling dunes laid out before their eyes. Watching the sun set from that vantage point is nothing short of spectacular. 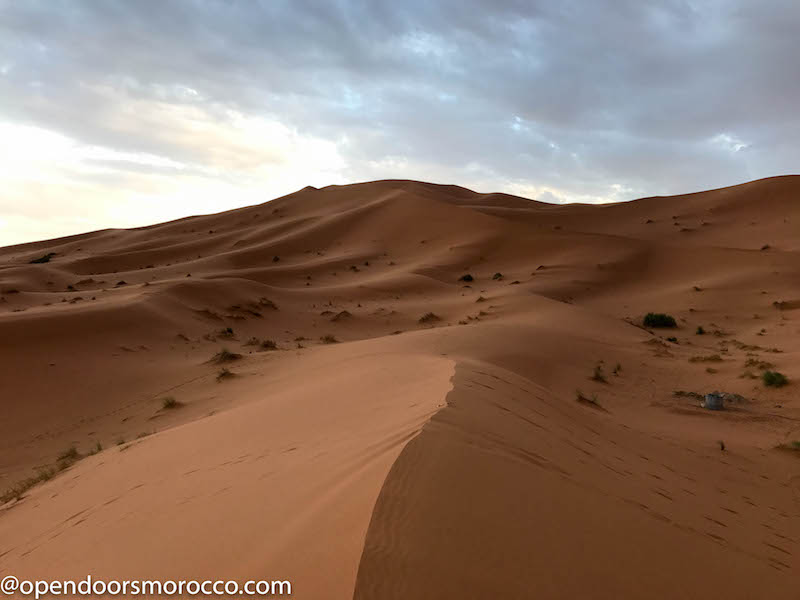 The beautiful, orderly, well-put-together bivouac, as seen in the photos above, was short lived. About 45 minutes after our arrival, a cloud formed on the horizon.  I remember asking Said, “Is that a sandstorm?” In hindsight, his response of, “Uh-huh” was rather nonchalant considering the contents of the “cloud” that was rapidly approaching (below). 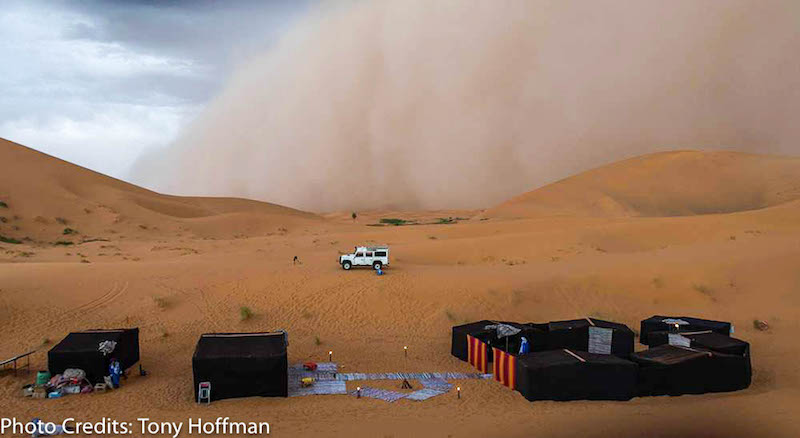 Turns out, the group on the camels had a similar experience with their respective Moroccan desert dweller.

Michael Bonocore, one of the TGL leaders, asked the camel guide, “How much time until the sandstorm hits us?”

Answer: “Five minutes.”  NOTE: Mustapha’s tone was the same as if he’d reported that it was five minutes until dinner.”

Followup Question: “How much longer until we reach the camp?”

The rest of the team reported that as the storm hit, Michael began calling out camera tips.  “Set your F-stops low. Shutter speed slow!” No one really paid attention to him at that point, and Michael probably got a mouthful of sand for his trouble.

While standing high on the ridge, Tony caught the following shot of the group as they trekked across the desert, with the storm hot on their tail. 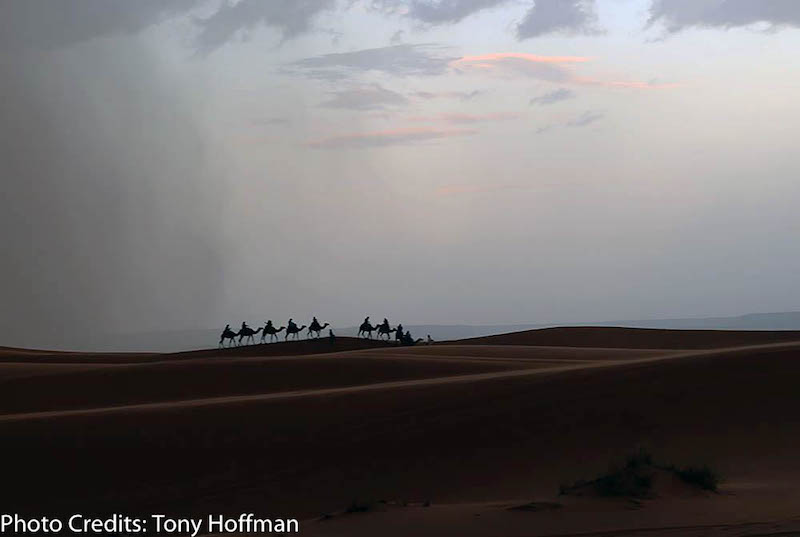 At about the time of Tony’s shot above, Michael (on camel back) shot the photo below of Said, Tony, and me standing on the ridge above the camp. Look closely at the tiny white, blue, and black specs to the left of the big cloud of sand. Look closer. Those specs are Said, Tony, and me shooting photos of the team and their camels in the distance. 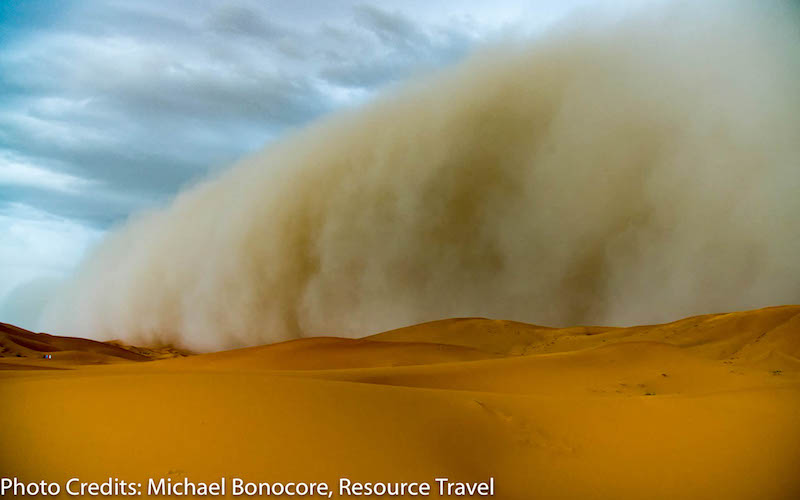 It wasn’t but a few minutes after Michael would have shot the above photo that the three of us abandoned the ridge and dove into the tents as the storm came upon us. As an aside, desert sand is amazing in still weather.  It’s so soft and luxurious feeling on your feet, very different than beach sand.  But when it comes in the form of a storm, it has a mind of its own. It transforms instantly from silky to prickly, stinging your eyes and pelting your skin with little needles. (Note: There is a functional purpose for desert garb.) We hung out awhile in the dining tent, digging sand out of our teeth and ears, wondering how the team on the camels was fairing. About 30 minutes later we heard noises outside. As he peered out a crack in the tent entrance, Said started laughing and said, “They’re having fun!” He was right, they were jumping around in the swirling wind and sand, hooping and hollering, taking pictures and videos. Susan’s photo below captures a glimpse of this wild hysteria: 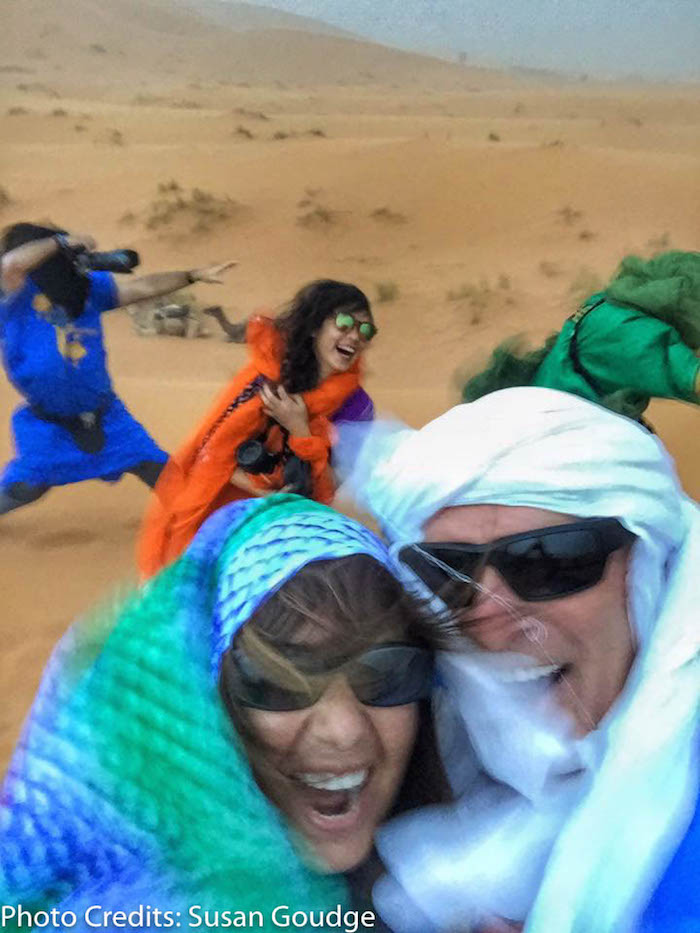 The best laid plans typically are no better than happenstance. We couldn’t have dreamt up with a more memorable means to celebrate the opening of Open Doors Morocco’s – Bedouin Bivouac. Nor could we have found a more fun group of people to celebrate with. In fact, it didn’t take long for the celebratory storm to calm down, leaving plenty of time for dinner, amazing star photos, and of course, the drum circle around the fire pit. In Morocco, great (and sometimes strange) memories tend to happen on their own without human intervention. It’s how we roll! 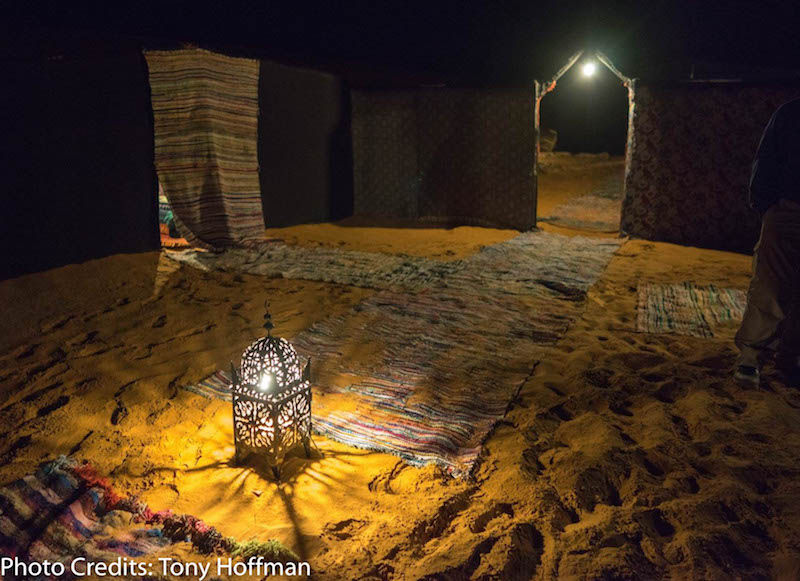 Send us a message to find out how you can enjoy the Bedouin Bivouac while participating in our fair wages momentum.