My business partner, Said and I were driving through the Moroccan Sahara and noticed a man digging near the side of the road. We were in the middle of nowhere and suddenly curious as to what he was doing. We decided to stop to investigate. Note: This isn’t something I’d do driving through the American countryside. But in Morocco, no one thinks twice about seeing what others are up to. In fact, everyone pretty much already knows… somehow… but that’s another article. 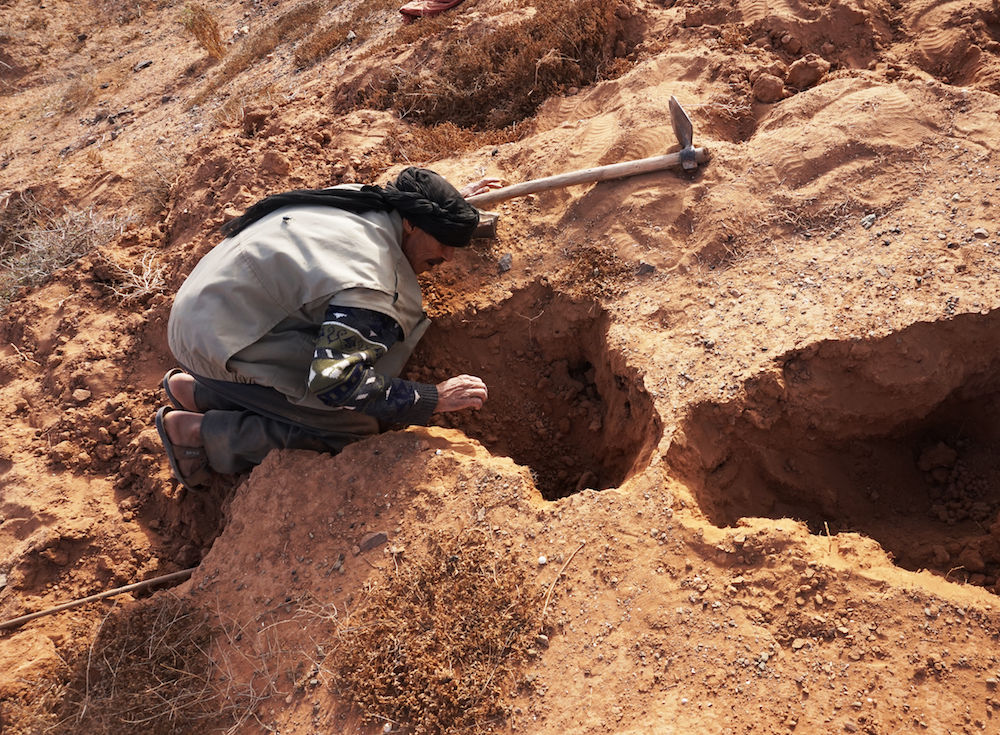 His name was Mohamed and he was hunting for cobras and vipers. He gave us this information as if it was the most normal thing in the world.

Turns out that Mohamed makes his living as a snake charmer. Never having met a snake charmer, we decided to hang around awhile in hopes of seeing him in action. The key, he said, is looking in a location with a lot of rat holes because the snakes hunt rats. Snake hunters dig into the rat holes hoping to find a Goldilocks Snake sniffing around the rat house. 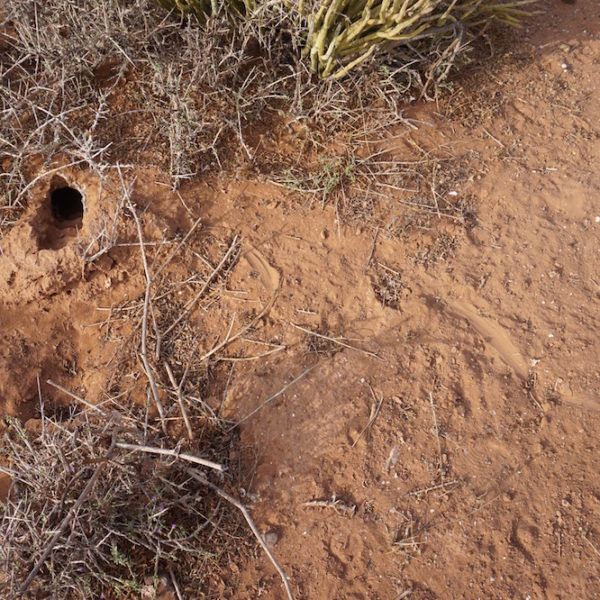 Unfortunately, that day wasn’t so lucky for Mohamed.  No snakes.

Some would say it was a lucky day for us.

When Mohamed found out how interested we were in his work, he invited us to his snake charming show later that evening, and then to his home.

How could we say no to a cobra show and a visit with a snake charmer?

Mohamed lives alone in the area of Bou-Jerif, far from any large city.  Bou-Jerif is in the Moroccan Sahara, about 13 km the Atlantic coast. The weather is cool in the summer, and a welcome respite from the heat of Marrakech. His home is  simple, yet surprisingly comfortable. There is a small hotel nearby where he performs his snake charming acts. He has four grown children, and his wife is dead. 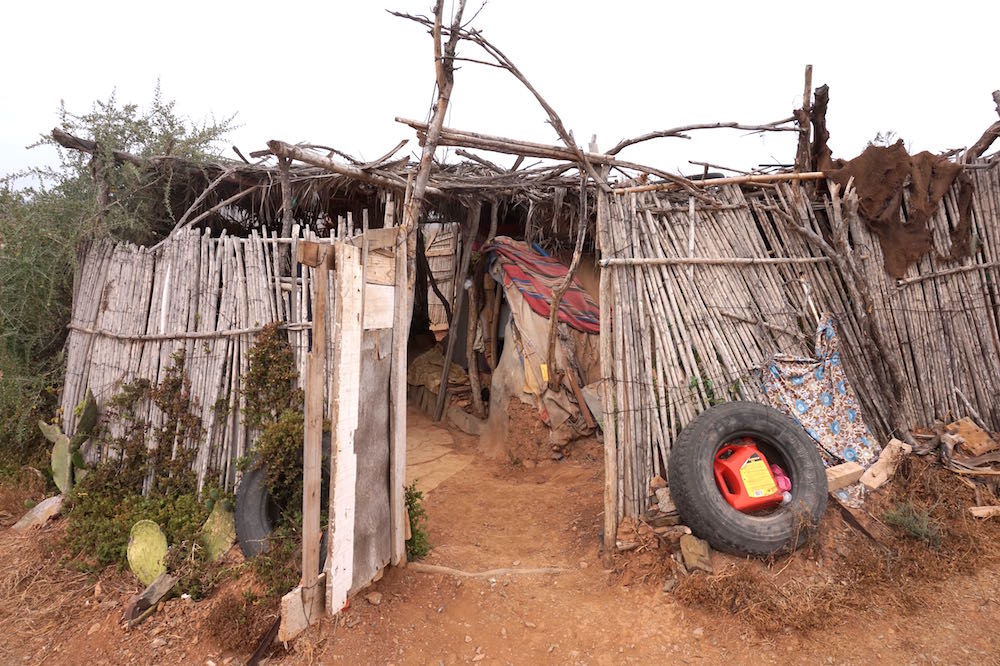 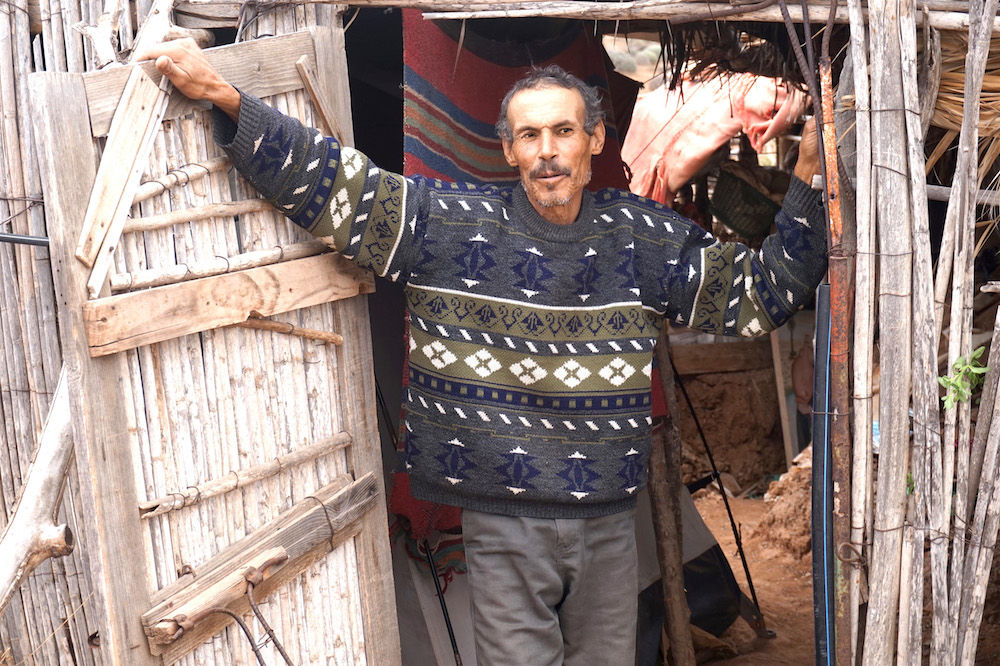 When we arrived to his home, he met us at the door and served us tea, same as all Moroccan hosts. 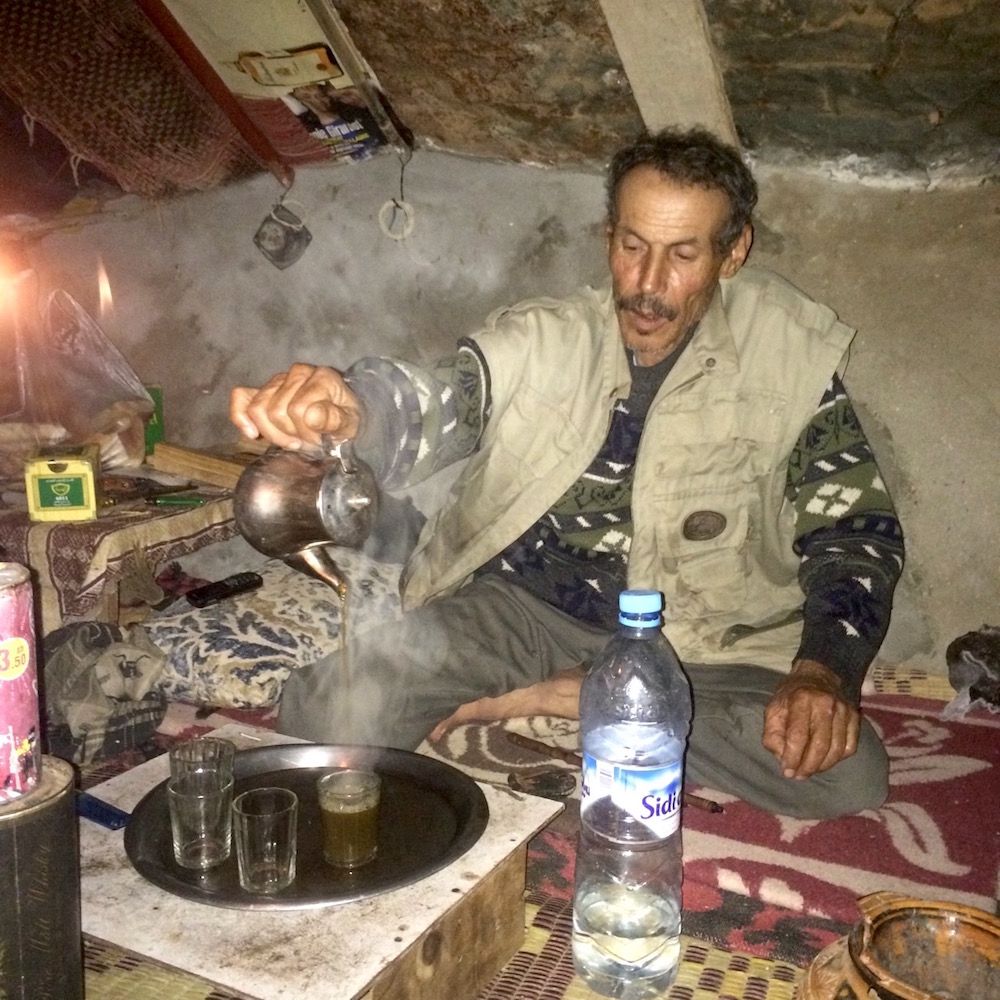 The conversation was in Arabic; Said played interpreter. Later, Mohamed introduced his homemade guitar to us. Surprisingly, it had a nice sound. 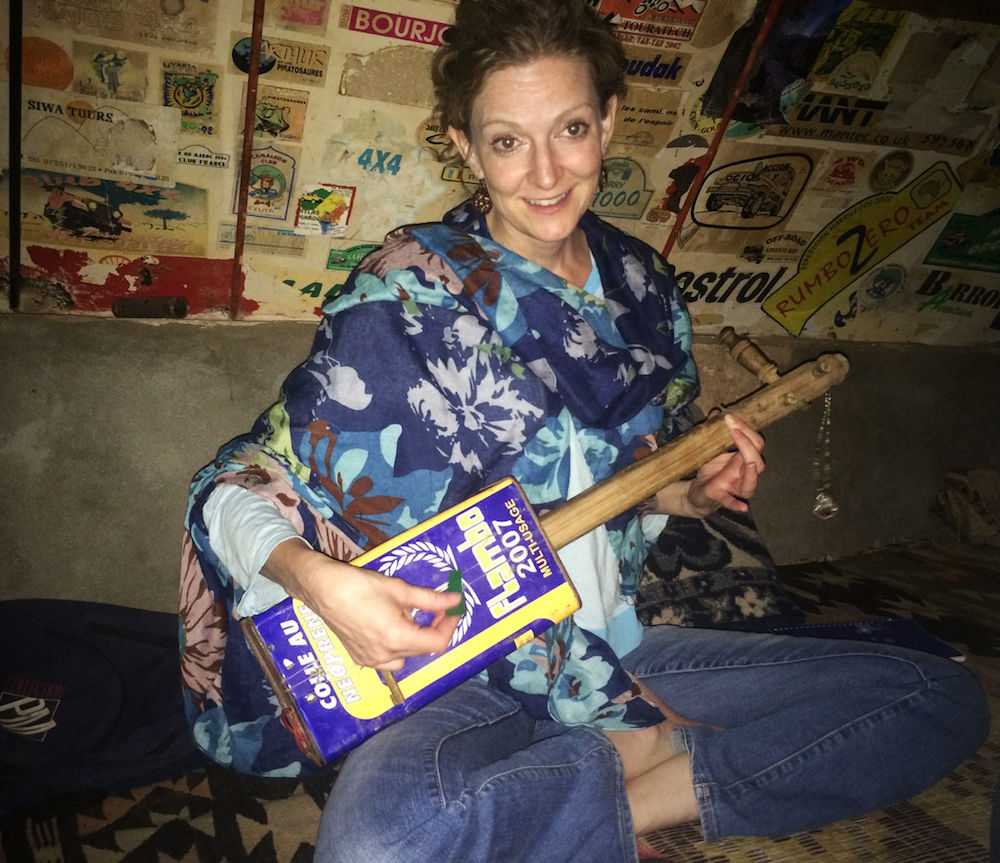 After tea and music, Mohamed shared his story with us. Said translated.

Over 20 Years of Snake Charming

“I started catching snakes in 1990.  I used to have a cafe in my small village, Saboya. It was a traditional cafe, not very fancy. Snake catchers used to come to my cafe and sometimes they stayed at my place because the area is well known for cobras. In general, people didn’t like the snake catchers much, but they felt comfortable in my cafe. I didn’t mind them.  They used to catch a lot of snakes in the forest around the village. When they returned from hunting, I was always afraid to see what they caught.  I would run upstairs while they were splitting the snakes between one another.

They used to talk just like holy people to make people think that only special people could work with the snakes. But with time, I discovered none of that is true. It was just a game they played to keep people away from what they were doing. They never told me how to catch the snakes, or how to work with them. They would tell me to go away because  poisonous snakes are really dangerous.

But from all I discovered, I found myself wanting to try to catch snakes. Most snake catchers have someone who teaches them how to do the work, but I never had any lessons from anyone.  I just learned by myself. Soon after, I found myself addicted to catching snakes. No one in my family has anything to do with the snakes and everybody is really afraid of them.” 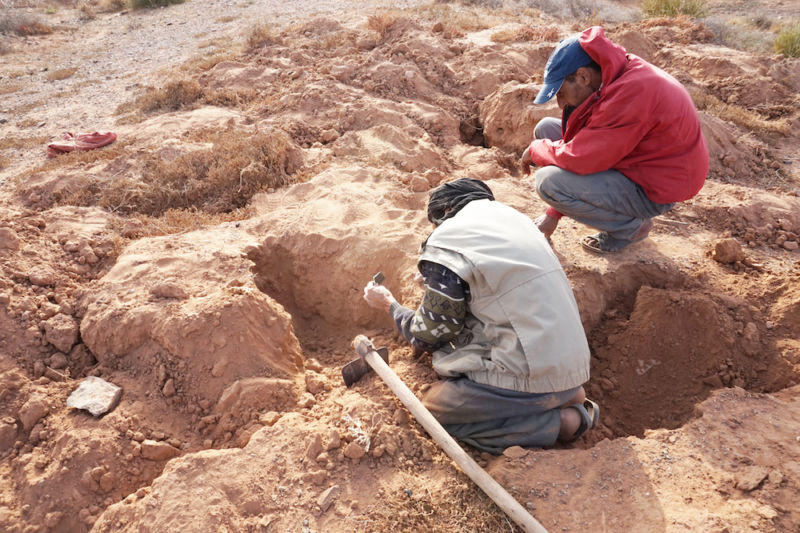 Mohammed uses a mirror to shine reflected light into a rat’s hole to see if a cobra may be hanging out in there.

“The first time I went out to hunt, I found a place, made some tea, and started looking for snake tracks. I found one nearby a big tree. After that I found some birds flying and getting closer to the ground. Normally, the birds follow the snake when it’s moving. Some of the larger birds eat snakes. I could see that there was a large cobra, and in the beginning I started to follow him, waiting to find an easier place to catch him. I didn’t know much yet. I was trying to get him to a hole to catch him, but later I discovered that it’s easier to catch them outside their holes. Soon, I found a good moment.  I caught it from the back, put the stick up near the head so he couldn’t move around, then grabbed it with my free hand and threw it into the bag. From that time on, I started catching snakes and performing with them.” 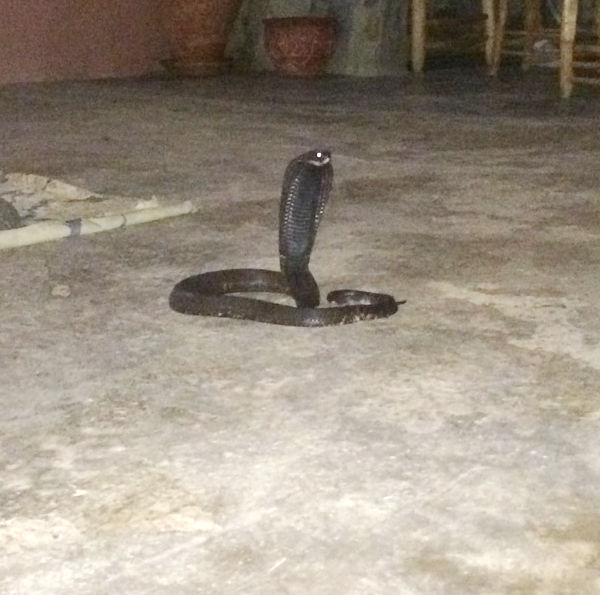 “It’s an adventure more than anything. Lots of people die just because of those snakes. There’s no special technique I can use with them. If they bite me, I am in danger. Until you immobilize the head, you are always in danger. If you can control the head, you are safe.”

“It’s an adventure more than anything.”

We asked him about the drums that snake charmers play, and this is what he said:

“Most people think that drums have something to do with putting the snake into a trance. But it’s just for the show, because it doesn’t change the snake’s behavior. I enjoy snake handling much more than owning a cafe. My pictures are all over the world now, and I’m still here in Bou-Jerif.”

Turns out Mohamed feels satisfied with his life. He says he has all he needs, and he enjoys the challenge his work brings him. He showed us around his place. He has bee hives and various food bearing plants in the “backyard.” His snakes live in buckets outside as well. We asked him if his snakes have names, and he said they do not. He said that the cobras seem to recognize him, “just a little.” But the vipers do not appear to recognize him in any way. 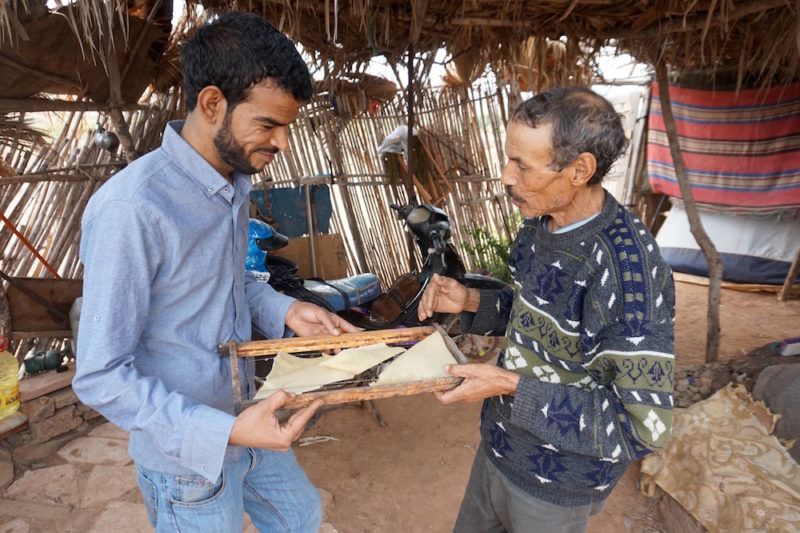 Mohamed was a fascinating person and he made us feel right at home. It was refreshing to meet someone who is happy living in a way that most people wouldn’t consider.  This takes courage.  He seemed to be at peace with the choices he’s made in his life.

Find out how you can travel through the Moroccan Sahara and meet individuals such as Mohamed HERE.  (Note: Don’t worry, you don’t just run into cobras.  We learned from Mohamed that it takes a lot of work to find cobras in their natural environment!)