Recently, in the famous blue city of Chefchaouen, I ran into the best Bissara soup I’ve ever tasted.  Bissara is a popular Moroccan soup prepared with dried and peeled fava beans. This soup is hearty with plenty of protein and is often served for breakfast in winter, especially in the north. The dish was originally known as a meal of the poor, but these days it’s found its way into the homes and restaurants of all social classes. 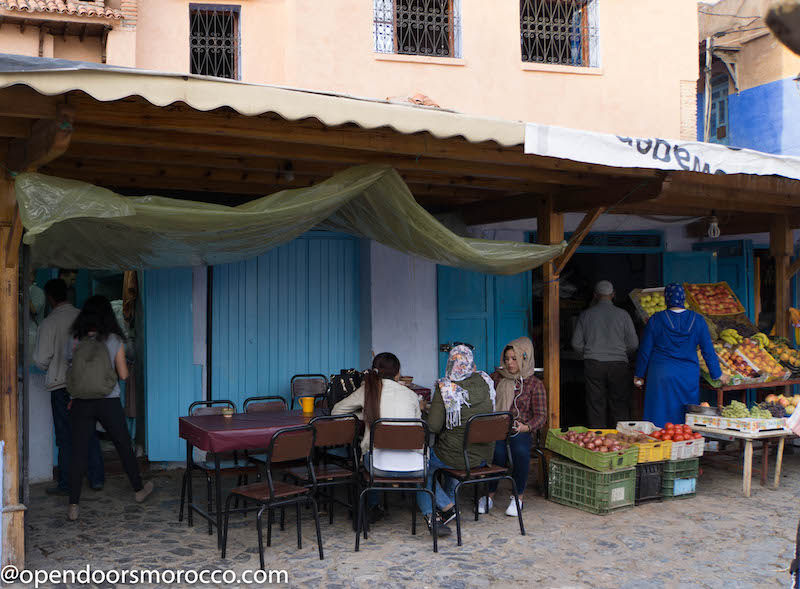 As we were photographing the city with Michael Bonocore of Resource Travel, Said suggested we stop for some bean soup. On first sight, this didn’t seem to pass as a restaurant to me. There were a few crude tables with metal chairs out in front. The interior consisted of the stove top heated by fire, a sink (with no soap in sight), and a couple tables. One man was standing at the stove dishing out bowl after bowl of hot gruel. For six dirham, you get a generous bowl of soup with a half loaf of bread. If you’re thirsty – it’s BYOD. Usually, I prefer not to see how the food is prepared or the dishes are “washed” when I’m eating at restaurants such as this. But, everything was in plain sight this time, so there was no denial possible. I decided that the boiling hot soup would kill any germs still hanging out on the spoon anyway. 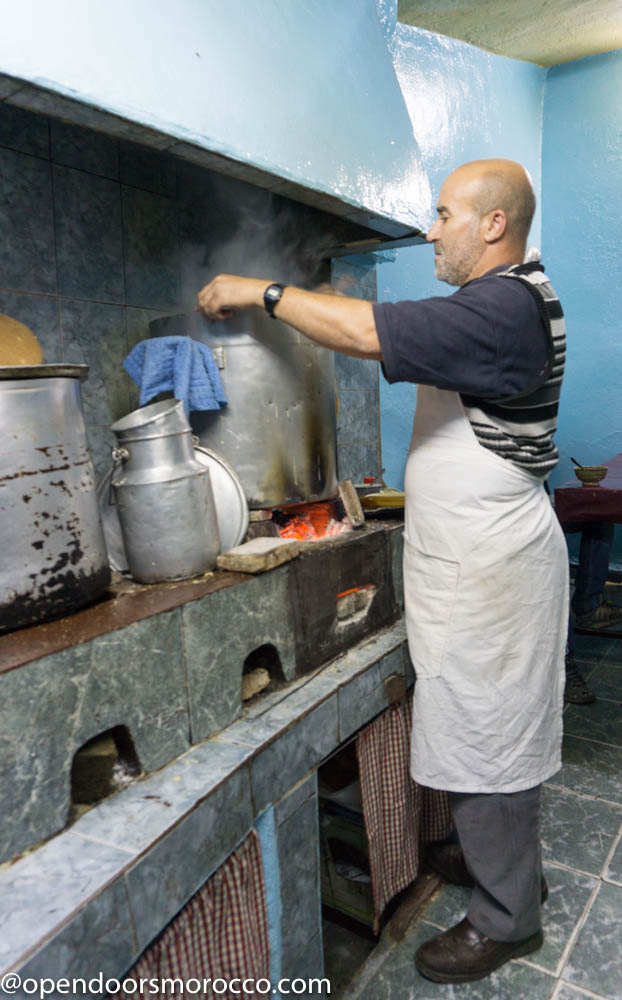 I’d eaten Bissara before and really liked it. But after trying THIS Bissara, I realized I needed to know how to make it. Curious, I asked the man making the soup if he’d teach me to make it. In the states this request may just get you thrown out of the restaurant, but in Morocco, “mechi moochkil,” no problem. He told me to return at 8:00 and he’d show me. Turns out, his name is Mustapha, and he’s the owner of the restaurant. He’s been making Bissara most every day for over 30 years. He was more than pleased to show me the ropes. My fledgling Arabic and his northern accent added a layer of complexity, but for the most part I understood his combination of words and gestures.

After my initial tutorial, he invited my friend Laura and me to his home for dinner. Who could turn that invitation down? Since we already had plans for that evening, we took a raincheck for the next night.

Dinner at Mustapha and Habiba’s

The next evening, we showed up around 9:30 PM and waited for Mustapha to close down the shop.  Soon we were on our way to his home for dinner.  He led us through the winding blue painted alleyways Chefchaouen is known for. 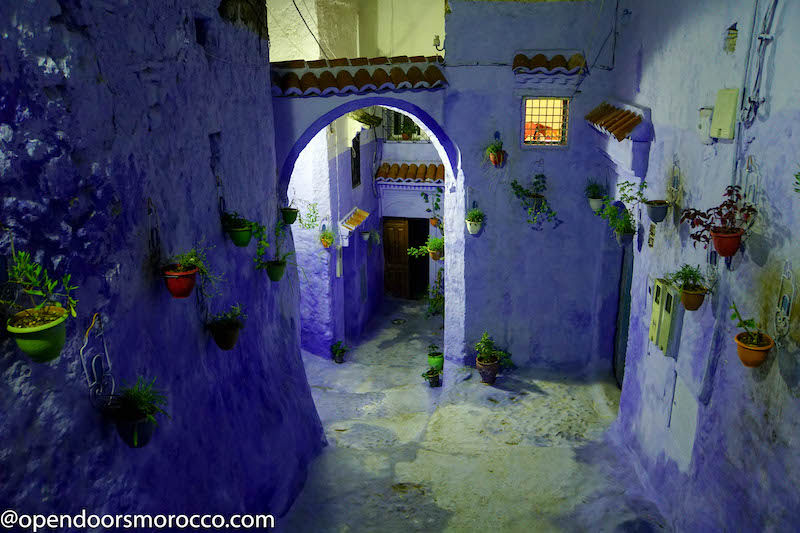 After about 10 minutes walk we arrived at his home and were greeted by Habiba, Mrs. Mustapha. I’d love to include a photo of Habiba, but many Muslims are uncomfortable with having their photos shown. Suffice it to say, she is a kindhearted small woman who wears a hijab, the traditional Muslim scarf for women. She was overjoyed to have us visit her home. How many American women would have no issues with hubby bringing some strays by for dinner at 10:PM? In Morocco, it’s not abnormal to have surprise dinner guests for a near to midnight dinner.  And 10:PM is well within the typical dinner hour in Morocco.

Mustapha asked what we’d like to have for dinner … meat tagine? seafood tagine? couscous? At some point in the discussion it was determined that I wasn’t 100% clear as to how to prepare Bissara, so it was decided that we’d make the dish together and have it for dinner. Admittedly, I’m a little remedial when it comes to cooking. Okay, a lot remedial. I’m the type to need explicit instructions and measurements. To my credit, Moroccans don’t measure and even if they did, it would be in metric. (Yes, I know, we Americans are the only ones not in the metric club.) My biggest challenge is trying to figure out how much of x they put into the pot. I really should have added “ish” after each measurement in the recipe below.

Below is the exactly how Mustapha showed me to make his scrumptious Bissara. I tried it on my own and it tasted just like his. 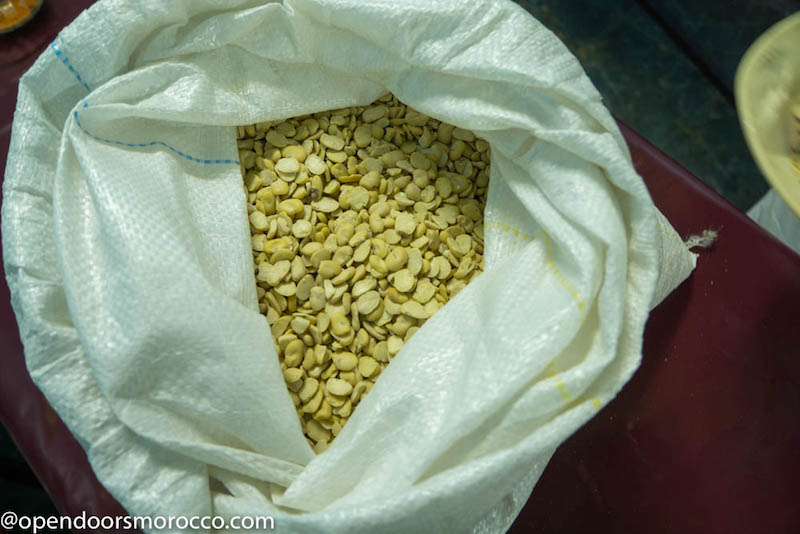 *Mustapha says that the large fava beans are not as good as the small ones. After 30 years in the business, he should know. 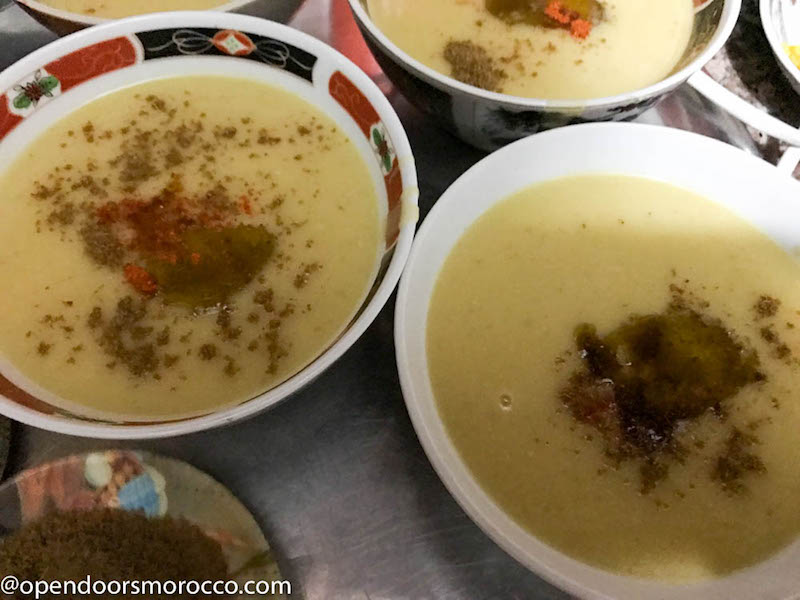 And that’s all there is to Moroccan Bissara soup. Mustapha has been making it for over 30 years. And before him, his father made it. He has it down to an art form. Leave notes in the comments after you’ve tried Moroccan Bissara for yourself.