The village of Tamnougalt is situated in the Draa Valley which stretches from the High Atlas to the sea, south of Tan Tan in the Sahara. It has been there certainly since the mid-1600s as the Kasbah des Caids dates from around then. The focus of this article is a woman living in the ruins of this village. 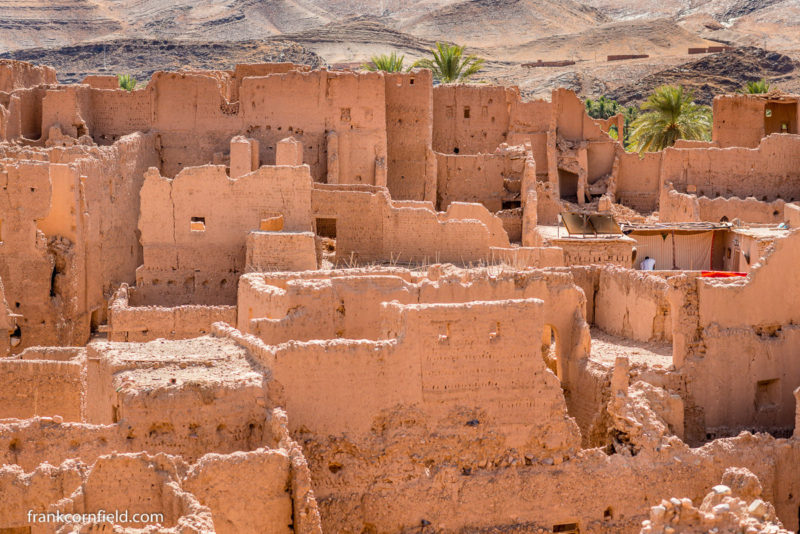 The village of Tamnougalt is situated in the Draa Valley which stretches from the High Atlas to the sea south of Tan Tan in the Sahara.

Aisha is a woman in her mid-50s who lives in Tamnougalt, and inhabits a large dilapidated kasbah in the old part of town, surrounded by other kasbahs in various states of ruin. She keeps goats and sheep, but otherwise has no real source of income. She invited us to visit her kasbah. 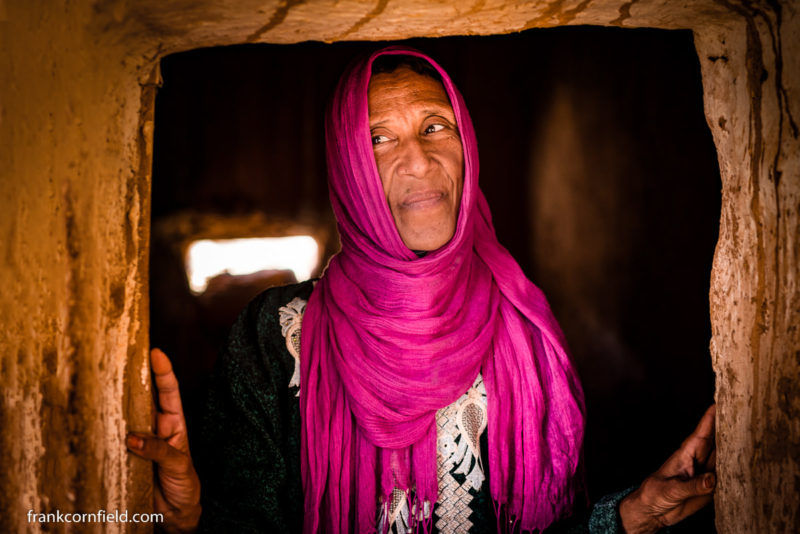 Aisha in a doorway of her kasbah.

Aisha was the only child of a very successful trader in wheat and flour. Her parents moved from Tagounite to Tamnougalt as it was the last stop for the caravans on the trading route for the Sahara in the days when Tamnougalt was important. Its name means ‘Meeting Point’ and it was the capital of the Mezguita Region and residence of the Caïd.

Fifty years ago most of the kasbahs were inhabited and Tamnougalt was thriving – nowadays it is a sleepy village surrounded by date palm groves and dominated by the stunning mountain, Jebel Kissane. The family must have been very successful as they were able to build a four story kasbah in which to live.   Aisha’s father died before she was born, so she never knew him. Her mother remarried and the new husband moved into the kasbah with her, but there were no more children and Aisha effectively became the sole inheritor. She was a very beautiful woman and had many suitors. She confided to me that she had loved someone once, but her step-father refused all offers. She thinks that her step-father wanted the kasbah to stay in his family. However, he died, and also her mother died without issue, and the kasbah became Aisha’s. 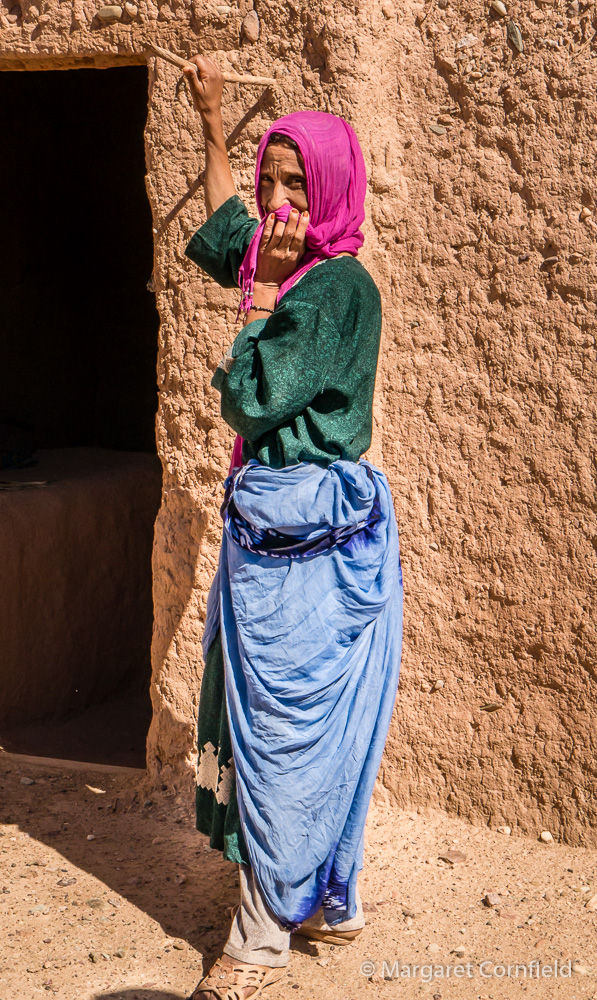 Aisha in front of her kasbah.

In the Saharan areas of Morocco, women are not expected to work outside of the family to earn an income. I did not ask the question of Aisha if she had been educated, but I suspect that being a female, education was not seen as significant. So when the family wealth had been used up, Aisha had to depend on the charity of others to keep her going. She does keep sheep and goats, and as we climbed the stairs of her kasbah the floors and corridors were covered in grains and grasses being dried to create a store of food for the animals over the winter period. In the days of her parents, these areas would have been used for clients, visitors and people of note, and decorated splendidly.

Aisha lives on her own on the top floor of the kasbah, in a couple of rooms. She also has her kitchen in this area, using a mud brick stand for boiling water and also a mud brick kiln for bread. There is currently no running water, so all water has to be brought up in pails or bottles over the three floors.

I asked Aisha if she were not afraid to live in the kasbah all on her own but she laughed. She started singing loudly to herself and danced to show me that she could do that without caring what anybody thinks. She can be herself there with no-one to criticise her. She showed me a small archaic TV that she treasures. She can watch music performances on that and sings along with them. She never stopped talking most of the time we were with her and smiled, and laughed a great deal chatting to us as if we could understand her. It was obvious she wanted to connect with us, but laughed over the language difficulties. The body language meant everything – we were welcome.

I’d like to add a few words about my guest author, Margaret Cornfield.  Margaret and Frank Cornfield started out as clients, and have become very dear friends. They were among the key supporters of our Indiegogo Project for a fair wages desert camp. Frank is an amazing photographer, as you can see by the images throughout the article. See more of his work at frankcornfield.com. Margaret is a talented writer and fellow lover of (most) everything Moroccan. It’s an honor to have her as a guest blogger. As an aside, if you happen to be travelling through Scotland, Frank and Margaret own a cozy B&B, Lochleven, found in the beautiful village of Killin, nestled in the historic area of Breadalbane. 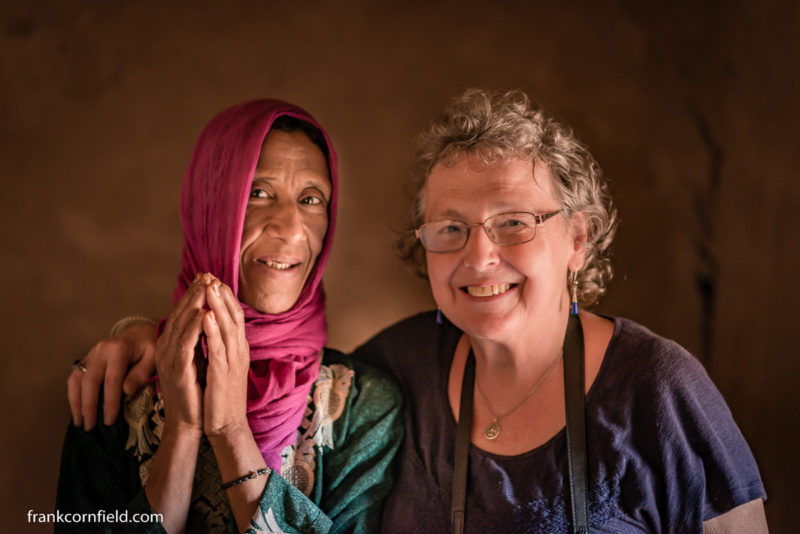 Margaret and Aisha in Tamnougalt.

Find out HERE out how you can get to know individuals such as Aisha by traveling to Morocco with us. 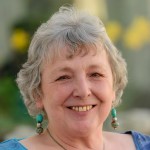 My name is Margaret Cornfield. I live in the small village of Killin in the Scottish Highlands, and I am a friend and customer of Open Doors Morocco. My husband, Frank, is a photographer and we have known Said for a few years and found him to be a wonderful guide and companion. His grasp of what makes a holiday exceptional is unrivaled and I am happy to support him and his team in the building up of what promises to be a company that really opens doors for both the client and the communities through which it passes. If I had a choice, I would spend more time in Morocco. I lived there for about six months when I was in my late 20s, and have visited several other times. However, as that is not a possibility at the moment, it is a real privilege to be able to be involved in a very small way in helping a young company develop and to keep a connection with a country and people that I feel truly in love with.